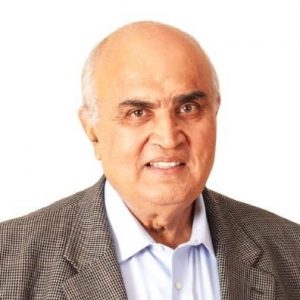 Kanwal was the first Indo-American Founder & CEO to take a venture-backed company public on the NASDAQ, co-founded and built TiE into the largest global network of Indian entrepreneurs, and co-founded Inventus where he applies his full energy and time building Inventus into a leading early stage venture franchise.

Kanwal came to the United States from India for graduate studies, advanced through the engineering ranks in a number of technology companies, and then co-founded Excelan in Silicon Valley to commercialize ethernet and TCP/IP – standards which became the basis of the Internet. He took Excelan public in 1987, becoming the first Indo-American Founder & CEO to list a venture-backed company on the NASDAQ.
Excelan later merged with Novell, where Kanwal served as EVP, CTO and a Board Director for five years, established Novell’s operations in India, grew the company into the second largest software vendor in the world and returned 100X to his venture investors. Later, Kanwal was CEO of Ensim and also CEO of Cybermedia, both companies in which he was initially a lead venture investor and board member. Kanwal negotiated Cybermedia’s successful acquisition by Network Associates.

Over the 14 years prior to co-founding Inventus, Kanwal was a full-time venture-angel, investing his own capital in more than 50 startups, leading the initial financings for 23 of them and playing an active role on their Boards. These prior venture investments resulted in 21 exits including 6 IPOs to date. Also active in Indian public policy related to venture, Kanwal advised India government policy makers in reforming venture regulations.
This encouraged fund formation in India, and Kanwal was the founding limited partner behind Infinity Capital-India a successful early-stage India venture fund. He also successfully advised the Indian Prime Minister and his government on their aggressive deregulation of telecom, leading to the explosive growth of mobile telephony in India, and laying the foundation for the country’s impressive IT expansion. At Inventus, Kanwal’s been a Board Director at Sierra Atlantic (ACQ: Hitachi), Assured Risk, Espresso Logic, GenWi, and observer at Poshmark.

Kanwal is a well-known figure in the global Indian community and a widely recognized authority on entrepreneurship. He co-founded The IndUS Entrepreneurs (TiE) to promote Indian entrepreneurship and was TiE President through the late 90′s presiding over its growth into a global organization with over 10,000 members who have been behind Silicon Valley and India start-ups. Kanwal is currently a trustee on the global board of TiE. With Inventus, Kanwal works closely with entrepreneurs in Silicon Valley and India, as he has since 1995, to apply his full time and energy helping them accomplish great result.
Education

Kanwal earned a BSEE from IIT-Bombay and a MSEE and Honorary Doctorates in both Business and Engineering from Michigan Tech. Kanwal is a board member on the IIT Bombay Heritage Fund (IITBHF), and also founded the Kanwal Rekhi Schools of Information Technology at both IIT-Bombay and Michigan Tech.