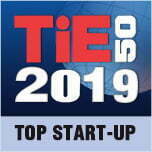 Since the inception of the TiE50 program, 84% of the winners and top startups have been funded with over a billions $. Many of these companies went on to get acquired or had an IPO. At least 29 of the exits were over $100 Million, e.g., FireEye (IPO), Mulesoft (IPO), Pearl Therapeutics (acquired by Astra Zeneca) and Velocloud (acquired by VMware).

TiE50 awards recognize the top technology and technology-enabled startups and is not restricted to any specific technology segment. The winners will be announced at TiEcon 2019, on May 10 & 11.

The application process will open on Feb 25th and close on March 24th at midnight!

The application is rigorously reviewed by a panel of judges including venture capitalists, angels, successful entrepreneurs and corporate executives. There is a nominal application fee of $500, that includes one 2-day free pass to the TieCon conference.

This year we will also select 10 companies from the Tie50 winners and give them an exclusive opportunity to present to a live audience including venture capitalists, angels, corporate executives and successful entrepreneurs to get feedback and exposure during the Startup Showcase Track on May 11 at TiECon 2019.